Got a question? Call us on 07772 557635.
To get the best experience from this site, you'll need to have JavaScript enabled in your browser.

So far in this short series of posts about asbestos, we’ve looked at what asbestos is and its effects on health. In this post, we’ll look at the risks of working with asbestos and what makes asbestos a danger.

Why is asbestos hazardous?

In Asbestos and its effects on health, we established that asbestos causes cancers and other illnesses. Asbestos is especially pernicious because its fibres are so much smaller than the fibres of other materials, meaning they can be breathed more easily and deeply into the lungs. The fibres are minerals so they never break down or decay in the body and, also because they are minerals, the body’s defence system cannot destroy them.

Asbestos is a ‘friable’ substance. Friability is the tendency of a solid material to break up into smaller pieces with little effort. With asbestos, small particles can easily dislodge, become airborne, and then enter the lungs. So friability is important in understanding the levels of danger posed by different materials.

The longer you have worked in environments where asbestos containing materials are present, the higher the risk that you have breathed in asbestos fibres – and the higher the consequent risks to your health.

In What is asbestos? we saw that there are two different asbestos fibre types: serpentine and amphibole. Crocidolite (blue asbestos) fibres split finer than any others and are therefore the most dangerous. 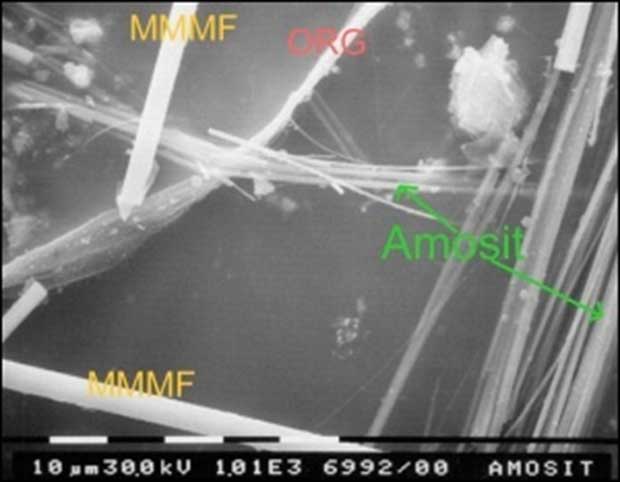 The above image shows Amosite (brown asbestos) fibres against some man-made mineral fibres (MMMF) and natural fibres (ORG). Notice how much smaller the asbestos fibres are.

The risk is accumulative

Although some materials are more dangerous than others and pose a higher risk, it is important to know that all exposure to asbestos carries some risk. Even low risk exposures are to be avoided as the nature of asbestos means that the risks all add up. (They are accumulative).

Asbestos can be common within the general environment because it was used widely in construction, as well as other industries, until it was banned in 1999. It can take up to 60 years for any symptoms to develop after exposure to asbestos. To ensure that you are not affected at a later stage of your life, it’s necessary to take steps to protect yourself now against any exposure to asbestos.

In the next post in the series, we’ll look at asbestos containing materials in the working environment.